Just a post/place to share my thoughts on some of the accessories I’ve added to my bike. I like to keep it simple and reliable. I don’t like clutter and I don’t like flashy. Here’s just a rambling on my experiences with products I’ve tried on my bike.

The Amazon links in this article are affiliate links, if you choose to use them I appreciate it. No annoying popups here or anything like that. Just the links that give me pennies on the dollar to help pay for the hosting of this site.

The first thing that needed to be done was the front fork had to go. The bike came with Suntour’s least expensive spring fork. It was very bouncy, didn’t dampen, inspired no confidence at all taking high speed turns and wasn’t predictable. It just didn’t fit my riding style at all. 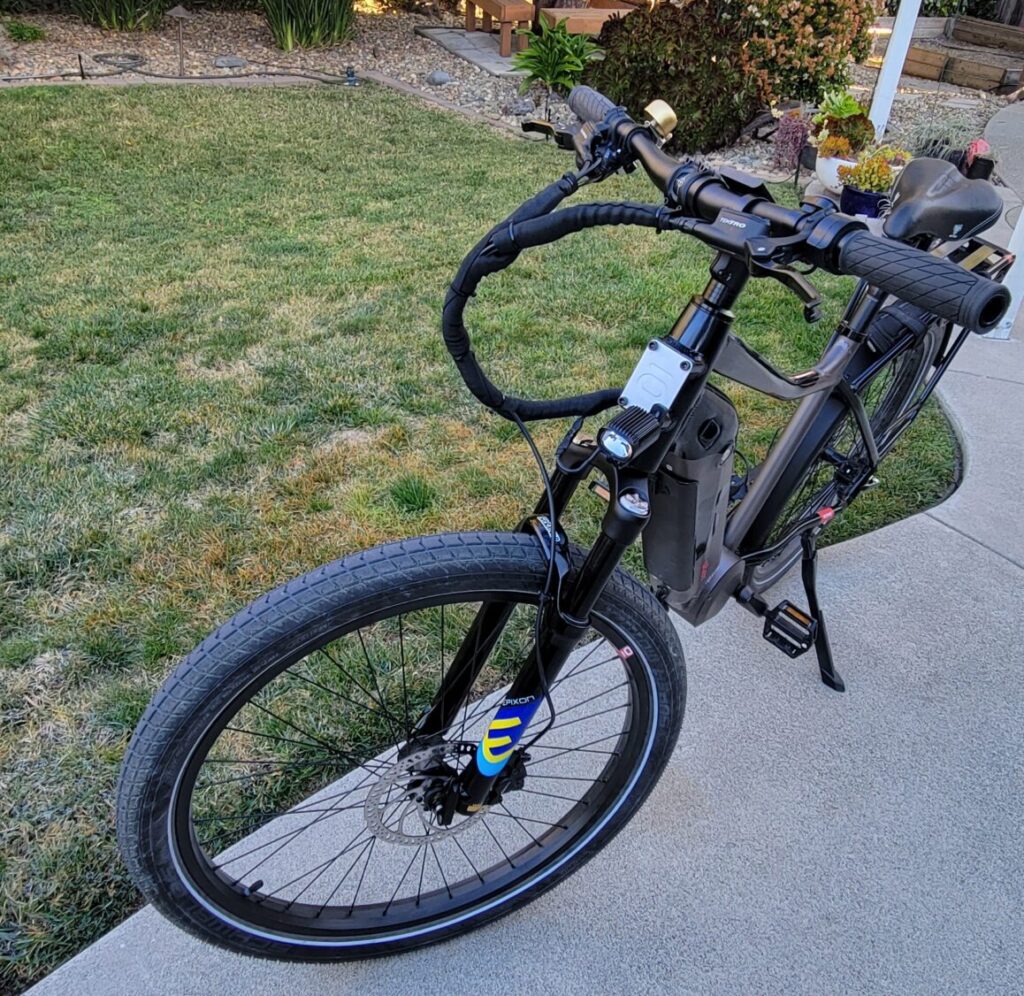 I replaced it using Suntour’s upgrade program where upon providing proof of ownership they send you a $100 coupon code to use on their website. I have to say I was super impressed with their customer service. I sent the image on Monday, had the code by the end of the same day, and it at my door on Thursday of the same week.

I’m not going to detail the process of installing the fork as there are a million youtube video’s out there that do a much better job than I can but if I was to add anything it’d be to make sure you keep track of all the little components in the head stock (washers, bearings, etc) in the order they came out. You can figure it out but it’s much easier if you pay attention to the order they stack in there. If you do end up replacing your fork I suggest getting yourself a Star Nut setter, it’s doable with just basic tools but setting the star nut straight is really important.

I ended up purchasing the Epixon 9 LO R. I purchased this specific one because it was lighter than the Raidon and was a true Air fork. The difference between the stock shock is night and day. I didn’t need the “RL” version as I rarely have a need to lockout the front fork.

A big thing to note here is when you install the new fork you will lose the lower mount points for the stock fender but no the light. Not a huge deal in my area as the rainy season is short and predictable. There is a way to reattach it to the bike when needed that is pretty easy without any permanent modifications to the bike or fender. (Future link to that post here)

The Dost Kope (and others) have a straight steerer tube which kind of limits you now a days to what type of fork you can use. Most if not all mountain bikes have a tapered tube so most of the big name fork manufacturers are out of the question. When you have an airfork you’ll also need a high pressure fork pump. Another thing to consider for maintaining the fork is purchasing a high quality fork lube. I personally use WPL Forkboost in a $5 needle applicator bottle. It makes getting the lube around the seal much easier and neater than the WPL bottle.

The seat that comes with Dost is one of those wide comfy saddles that cradles your whole butt. Not my style at all and actually less comfortable (for me) than you standard narrow saddles. I took the seat off my gravel bike while I waited for my new Brooks B17 saddle. I’ve always wanted to try a Brooks out and figured now was the time. I also purchased a super inexpensive Suspension seatpost cover. This is the one I purchased and it fits the Suntour NCX suspension seatpost that came with the bike perfectly.

I’ve got about 300 miles on the Brooks so far, and it’s just now barely started to break in. It was pretty hard at the start but not unbearable, now that it’s breaking in, I’m starting to feel why people love these saddles.

The bike shop I purchased the saddle at suggested I do not use the Proofide that came with the saddle. I initially did not but did notice the leather seemed to dry up a bit and wasn’t supple at all so I went with Brook’s recommendation and ended up applying it. It re-hydrated the dry spots, softened the leather just a little bit and supposedly gave it some water resistance. Speaking of water resistance, I’ve read that the Brook’s saddles don’t do well when wet, I haven’t had any issues with it in the rain yet but just something to note. I do cover it on the ferry with my hat to keep any splash from the water off. I also keep a plastic bag in my panniers to cover it with in case of wet weather.

Here’s a cool little trick if you use a saddle cover. Depending on the water conditions on the ferry, sometimes there is some serious spray from the water on the bay. Enough to give the whole bike a coating of brackish water. I was using a plastic bag or my hat for a while but picked up the Brook’s cover. You can neatly pack it under the seat!

The stock pedals that came with the Dost are decent. Honestly, they work just fine. They have a decent amount a grip and I had no complaints. They could have been a little wider and a little more grippy but this was more of a bling purchase. I picked up these Stamp 2 Large pedals by Crank Brothers. It has removable pegs, is much wider and much more grippy.

I also picked up some Lekkie Buzz Bars aka crank arms. I got them in 170mm and again, this was more of a bling purchase, I really like the look. They also have the “benefit” of being self extracting as you don’t need a crank puller to pull them off anymore. It’s not really benefit though as you need another specialty tool to remove the cranks, the Park tool FR-5.2 Cassette lockring tool. It’s cheaper than a crank puller so maybe that’s a win?

The last part of this entry is the Lekkie One Nut. The locking nut on my motor pretty frequently starts to loosen up. It starts creaking pretty bad after 2-3 weeks and I always end up having to tighten in about that interval. I’m hoping this One Nut solves the issue. Time will tell.

Mirror
I quickly realized after about a week of commuting a mirror was an absolute necessity on the few short road sections I’m on. I really dislike having lots of stuff on the handlebars and searched for a while to find a mirror that was small and unobtrusive. I tried the standard Cateye BM-45 bar end mirror but ended up returning it as it was always sticking out ready to get dinged on something.

I found this mirror: The Beam – Corky Urban Bike mirror. It’s super small, folds into the bar end, and you barely notice it’s there. At $35 though, I was having a hard time justifying buying it. After saying screw it, I gotta say I love this little mirror. It has actual glass, not plastic, is super clear and is super unobtrusive. Only issue is it didn’t exactly fit into the bar end. I ended up having to mount a file in my vise and scraping down all 3 of the little nubs about 1mm each to fit it into the bar.

The bike came with this brass standard pull down the trigger and strike the bell… bell. I am on a public walking/cycling path for good portion of my commute and on nicer days there is a decent amount of traffic on the trail. A lot of these people have headphones in and are completely oblivious to bicycles. I’m very cautious and don’t speed by people unless I know for sure they know I’m coming. The single ding of a normal bell just wasn’t cutting it. It was loud, startled people and not always effective. After some searching I landed on this Timber Bell on Amazon. I think it’s primarily used for downhill Mountain bikers.

When it is switched on, it just constantly jingles. It’s not loud enough to startle people but it is consistent enough that they hear you coming from a good distance. Kind of sounds like the ice cream cart guy coming. When I see pedestrian traffic ahead, I toggle it on and I’d say people respond to it about 90% of the time vs 60% with the traditional bell. Very happy with it so far.

Pro tip! The lever on the timber bell is pretty sticky as it comes, can be a little difficult to one hand. I fixed this by spraying a little LPS-1 in there and now it’s smooth as buttah. (See if you can get LPS-1 at your local hardware store, the Amazon price is ridiculous.)

I removed the covers over the Bafang motor. There’s a lot of back and forth on various forums about heat and the Bafang BBS02 motors. Some people say they heat up fast and it’s bad for the controller, others say they go pedal to the floor 24/7 and have no issues at all. I kind of like the look and figure it can’t hurt to have better cooling so, I removed my covers.

Picked up some of these Wolftooth color headset spacers. The stock spacers are 5mm and there are four of them so you have 20mm to play with. I ended up buying four total. Also picked up a 20mm spacer just in case I didn’t like the way the color spacers looked.

This site uses Akismet to reduce spam. Learn how your comment data is processed.